While the rest of the world cuts down on drinking for Sober October, it looks like South Africans are going to need to cut down on daily fuel usage. Wednesday’s petrol increase brings the petrol price up by nearly R4 across the board this year alone and experts say that we could be looking at R18 a litre by the end of the year.

To put the cost of fuel into perspective, Business Insider tested a wide range of vehicles to determine how far each would get with R100 of fuel. The winner, beating perhaps more obvious contenders like the Suzuki Swift and Ford Fiesta, was the Volkswagen Polo – which will allow you to travel a solid 130km on R100’s worth of petrol. 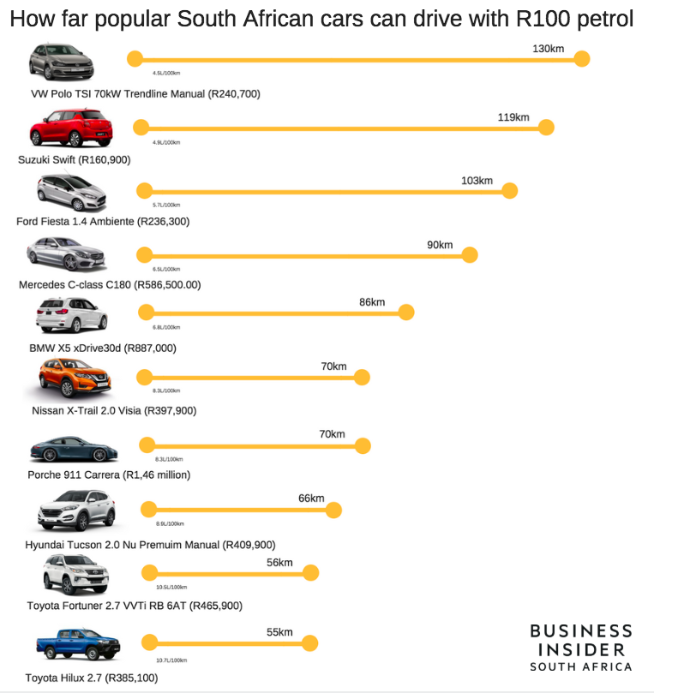 Naturally, commuters travelling by bus or taxi will also be expected to cough up more cash per trip, as transport associations attempt to balance profitability in the face of a mammoth petrol price increase. But we won’t just be feeling the impact on our pockets at the pump. South Africans will pay more for food and other goods. It’s this knock-on effect, which has far-reaching consequences for every single South African. South Africa, for example, relies heavily on road freight to transport and deliver goods to retailers. Not only will the agricultural sector be forced to count the costs, but transport logistics companies, vital to supply chain, will have no other option but to raise service prices to counterbalance costs. This forces retailers to hike the prices of goods, leaving the consumer to bear the brunt.

As your finances come under strain, it’s only natural to feel added pressure. What many South Africans do when they’re not sure they’re going to make it to month-end, is default on their debt repayment to free up some much-needed cash. This behaviour can quickly snowball into being over-indebted and potentially being blacklisted. Before you get to the stage where creditors are constantly phoning and your credit record is affected, talk to a qualified debt counsellor. Under debt review, you are legally protected against any creditor contacting you or taking money from your accounts.